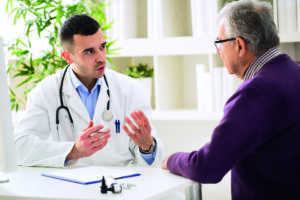 Not everyone is familiar with many aspects of new technology. It changes so fast that even the moderately savvy can feel left behind. But its potential is breathtaking… and life changing.

The development of smartphone apps has, for example, opened up opportunities for researchers to collect data from people with healthcare conditions. This enables a greater depth of understanding, and ultimately better ways to tackle healthcare conditions and enhance daily living.

I look after people with myositis, a long-term autoimmune condition that most commonly causes muscle inflammation, potentially leading to weakness and inability to carry out day to day activities.

Inflammation of other organs, such as the skin and lungs, can also occur.

Myositis can begin at any time from childhood all the way through to older ages. Although there is currently no cure for myositis, we have many treatments that suppress the immune system and keep the condition under control, allowing people to maintain independence.

What is the current challenge?

I often see patients suffering a flare of myositis, where sudden increases of inflammation occur, leading to fatigue, weakness and pain, along with other potential symptoms. I realised that there is currently no way to predict or quickly identify a myositis flare, which risks the development of irreversible organ damage from uncontrolled inflammation.

What is the potential solution?

In recent years, researchers and clinicians have been developing remote patient monitoring methods that allow flare detection in a number of chronic conditions, such as inflammatory bowel disease or rheumatoid arthritis. One method of remote patient monitoring involves people giving frequent (ie daily) information or answering questions on their flares, using smartphone apps. Clinicians and researchers can then use this information to detect increases in symptoms, which may be caused by a flare.

Other studies have involved asking people to wear “sensors” (small devices that can be worn or attached to a person’s body) to identify changes in walking pattern or speed to detect changes, which could allow flare detection.

A recent study – The Myositis Physical Activity Device study – aimed to investigate if remote patient monitoring could be used to detect the occurrence of myositis flares. A total of 20 adults with myositis helped to design the study and smartphone app, including its format, questions to be included and interactivity.

For over three months each participant answered daily questions about their symptoms via the app, while continuously wearing a small sensor inside an adhesive patch on the side of their leg.

A huge amount of data was collected during the study; 21,709 responses to questions and 40,145 hours of sensor data. Initial analysis has allowed us to, for the first time, demonstrate the ability to detect myositis flares and investigate the links between symptoms and flares, confirming that increased symptom levels are associated with flares.

We have also been able to investigate the impact of flares upon employment, which has never been done before in myositis. Analysis indicates that flares are associated with fewer hours worked and reduced work productivity illustrating the day-to-day impact of myositis. Sensor data analysis suggests that walking pattern changes with flares and changes of myositis “disease activity”.

The results of the study show that remote patient monitoring, using an app and wearable sensor, can potentially allow the identification of myositis flares.

This means that in the future, remote patient monitoring could be used to:

What is planned for the future?

We plan to the next phase of the work later this year. A larger group of people will be asked to answer daily questions via the app and continuously wear a sensor for a longer period of time.

Should results continue to be encouraging, remote monitoring could become routine in myositis care in the future. Ultimately, this will lead to better care, improved treatments and enhanced quality of life for people with myositis.

Clive Nayler has dermatomyositis and interstitial lung disease and took part in the MyoPAD study. Read his story here.

More about the MyoPAD study

The Myositis Physical Activity Device (MyoPAD) study – funded by Versus Arthritis and The National Institute for Health Research Manchester Biomedical Research Centre – aimed to investigate if remote patient monitoring could be used to detect the occurrence of myositis flares. Dr Alexander Oldroyd worked as Principal Investigator for the study alongside Prof Hector Chinoy and Prof William Dixon, and in collaboration with the Manchester Myositis Research Group and The University of Manchester’s Centre for Epidemiology Versus Arthritis.

About the author: Dr Alexander Oldroyd is an Academic Clinical Lecturer within the Centre for Musculoskeletal Research, the University of Manchester